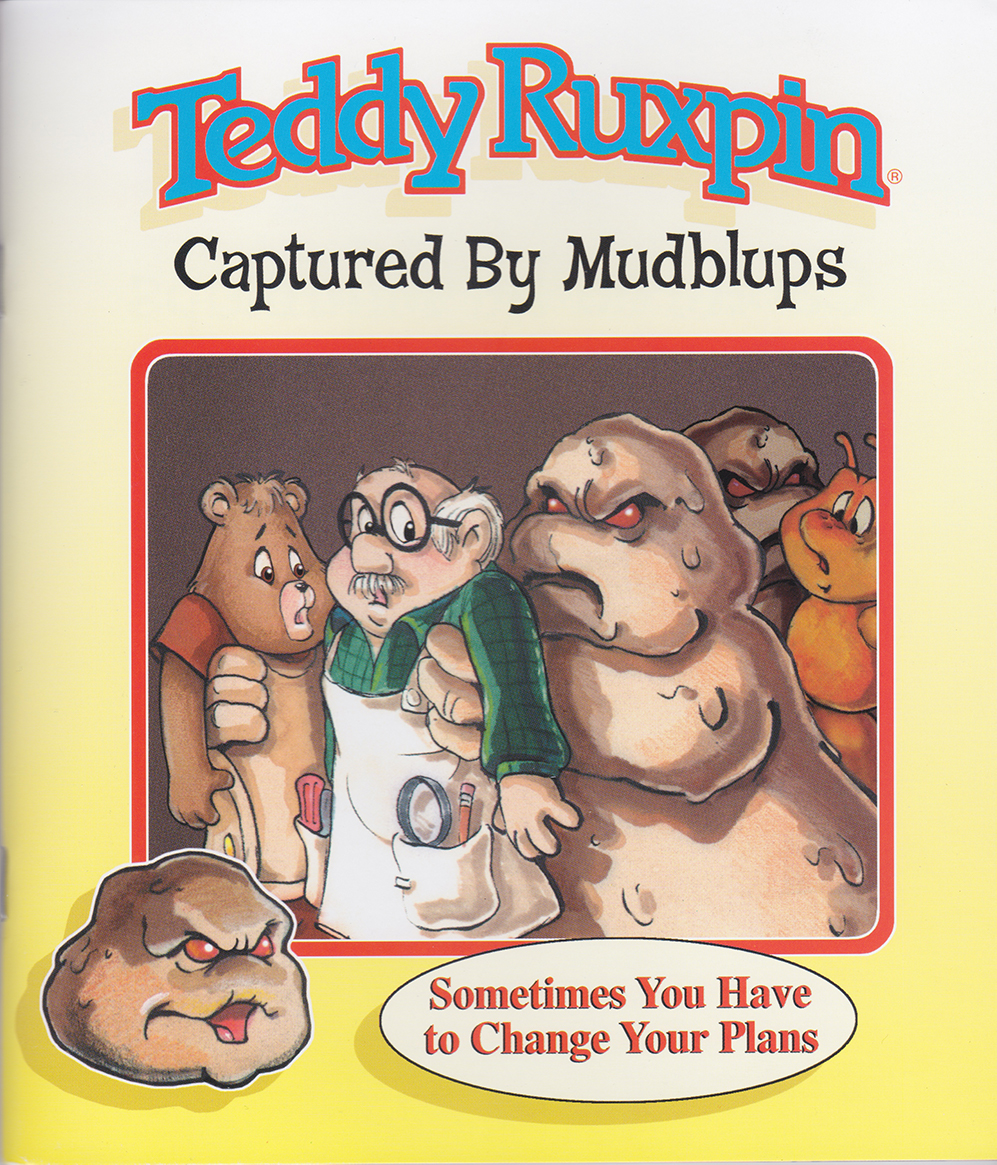 Sometimes You Have to Change Your Plans

Grubby and I had set out on a journey to find a treasure. But now there was something more important to do.

“Captured by Mudblups” is a story from the World of Teddy Ruxpin Adventure Series and is a re-imagining of parts of the 1985 stories “The Airship” and “The Missing Princess”. It was released for the BackPack Toys Teddy Ruxpin talking toy. Released in 2006, this story marks the first time any version of “The Missing Princess” storyline had been available for a verison of the talking toy since its debut on the original Worlds of Wonder Teddy Ruxpin.

The story expands the original version of “The Missing Princess” to include elements of the 1985 “The Adventures of Teddy Ruxpin” ABC Live Action Special. It uses soundbites from that production to expand the narrative.

Notably, the introduction of Leota the Woodsprite--traditionally included in “The Airship”--has been moved to the start of this story.

Like every entry in the BackPack Toys series, two books were issued for “Captured by Mudblups”: one picture book and one containing the entire text of the story. The picture book is noted for not only using some of the original art of the 1985 edition of “The Missing Princess”, but also updated many of its character models to conform more closely to their later renditions, such as Grubby’s appearance becoming more rounded and less angular and bug-like. Meanwhile, several pages of brand new art were created to accompany the expanded narrative.

While on their quest for the fabled Treasure of Grundo, Teddy, Grubby, and Gimmick crash the Airship into the tree of Leota the Woodsprite. Leota shows them how to best “drive” the Airship, allowing them to direct it more easily. Unfortunately, the team end up following a phony map from Tweeg and land in the middle of the Great Desert. While digging for coal as a substitute fuel for firewood, the three friends are captured by the cave-dwelling Mudblups. Separated from Grubby, Gimmick and Teddy meet another prisoner, Prince Arin, who explains that his sister Aruzia has been kidnapped and he hopes to one day escape and find her. As the group makes a daring escape, they decide to put their quest for the treasure on hold and instead seek to rescue the kidnapped princess.

The voice of Leota the Woodsprite introduces the title of the story before Teddy begins to sing (“Come Dream With Me Tonight” (Introduction)).

Teddy briefly recalls he and Grubby’s encounter with Newton Gimmick and explains that while the Airship was finally airborne, there was a problem steering it. Suddenly flustered that he’s never considered how to direct the ship, the Airship crashes into a giant tree.

Suddenly the group is confronted by a tiny creature: Leota the Woodsprite. Gimmick insists Woodsprites don’t exist, but Leota is furious at the intrusion of her home. Teddy manages to flatter Leota, whose disposition immediately softens at the compliment. He apologizes for damaging her tree, and Leota offers to help them descend back to the ground and work out the kinks in the Airship navigation.

Leota suggests adding a propeller that would connect to the ship’s rudder, allowing it to move in a given direction. Once this modification is made, the ship appears to fly perfectly, and they bid farewell to Leota (“Come Dream With Me Tonight” (Excerpt)).

As the Airship continues its journey, Teddy suddenly realizes that they do not appear to be anywhere near where they’re supposed to be. Gimmick concurs and the crew inspect the map and quickly discover it’s not the real map. They deduce that Tweeg has switched maps on them. As they begin to run out of fuel, they land the ship in the middle of the Great Desert and disembark in search of firewood.

Suddenly, Gimmick trips over a rock and discovers it’s actually coal, which they can substitute for wood in the Airship. Grubby stumbles up on a nearby cave loaded with coal and the three begin to dig it out and load up the Airship with their new fuel supply. As the sun begins to set, Grubby becomes nervous that something might actually be living in the cave. Gimmick shrugs off the notion, assuring Grubby that the desert is not conducive to supporting any kind of life.

And suddenly the three are surrounded by strange creatures made entirely of mud!

The creatures seem furious as they herd the three through their tunnels into a large room where one of the muddy beasts appears to be their king. The king orders Grubby to be put to work while Teddy and Gimmick are locked in a cell.

As Teddy and Gimmick ponder what kind of creatures they’ve encountered, a new voice explains to them that they are called “Mudblups”. They turn to see someone else in the cell: a young man clad in shining armor who introduces himself as Prince Arin, the son of King Nogburt.

The prince explains that his sister, Princess Aruzia, has been kidnapped and he’d set out to find her. He was captured by the Mudblups and imprisoned, left to feel like a failure and a coward. Teddy and Gimmick do their best to reassure Prince Arin while they vow to help in whatever way they can, assuming they can ever escape.

A short while later, a mysterious man in a trench coat appears in the caves, carrying with him a giant contraption with a bright. He aims the light at the three prisoners and then swings it around to point it at a Mudblup. The creature screams in agony, covering its eyes, and the man in the trench coat escapes.

Later, a Mudblup arrives at the cell and distributes a portion of food to each of them. It tastes awful, but Teddy remarks there’s something familiar about it. Suddenly, part of the dirt ceiling falls onto Gimmick’s plate, revealing a pinhole of light. Together, the three dig their way out of the cell and back to the surface floor.

The escaped prisoners make their way back to the Airship and devise a plan to rescue Grubby. Gimmick and Teddy leave Prince Arin to guard the Airship while the two of them descend back into the caves, this time armed with lanterns. Each time a Mudblup approaches, Teddy and Gimmick shine their lanterns in their eyes, causing them to flee. Having lived in total darkness, the Mudblups’ eyes are extremely sensitive to bright lights.

They make their way through the tunnels until they find Grubby working in the kitchen. They suddenly realize that it was in fact root stew they’d eaten earlier. Together, Teddy, Grubby, and Gimmick make their way out of the Mudblup Caves and back to the Airship.

Teddy introduces Grubby to Prince Arin and they explain to Prince Arin that they are prepared to abandon their quest for the treasure to instead help rescue Princess Aruzia. With no trail to speak of, they head north to look for clues, grateful to have escaped the filthy Mudblups (“The Mudblup Song”).