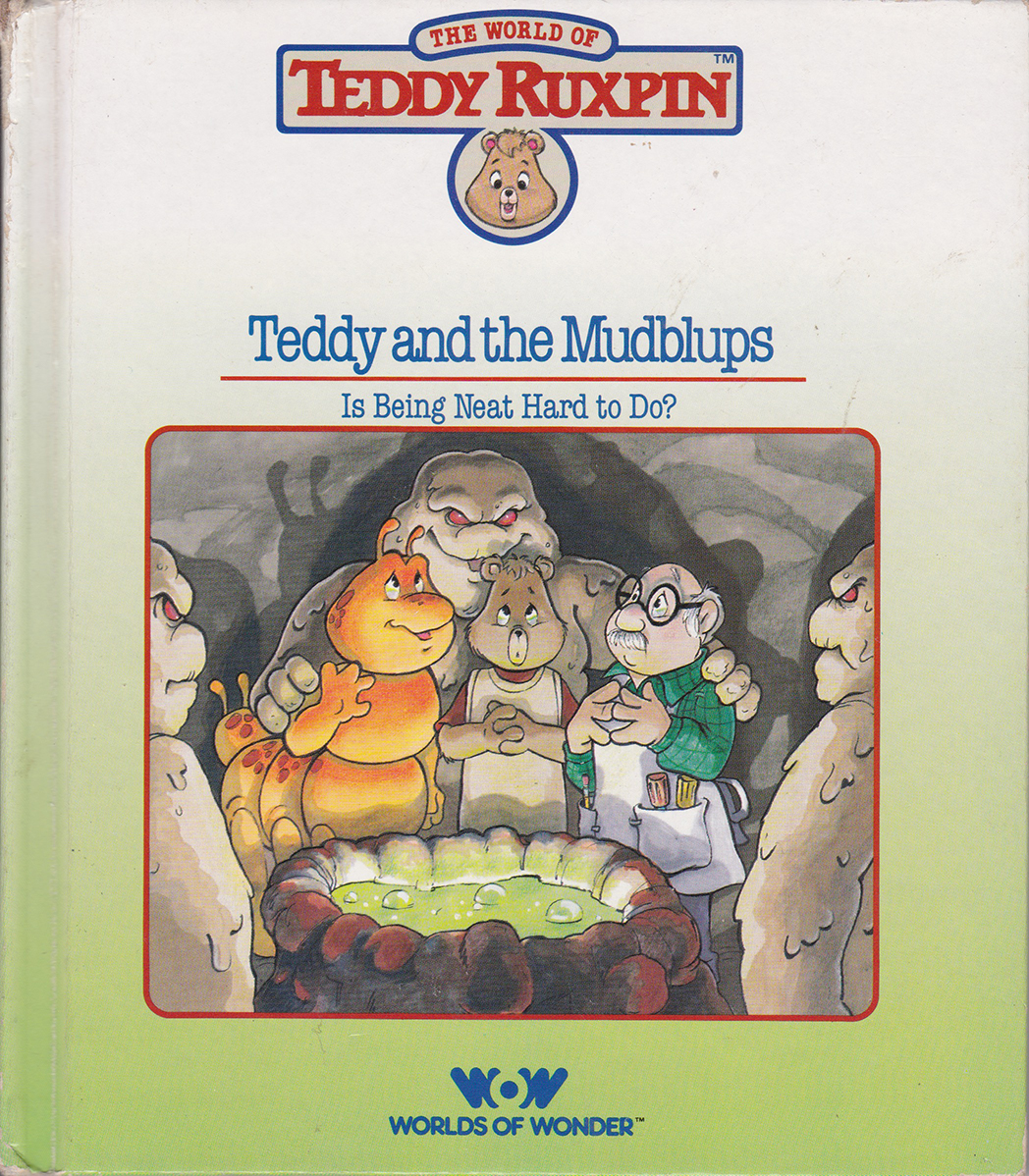 Is Being Neat Hard to Do?

...but nothing ever happens if you don't really try.

In “Teddy and the Mudblups”, Teddy, Grubby, and Gimmick return to the Great Desert to test Gimmick’s new invention, a “pliable habitat”, and end up captured once more by the filthy Mudblups.

The story marks the second appearance for the Mudblups, who first appeared in “The Missing Princess”.

Starting with the 2006 BackPack Toys Teddy Ruxpin, this story would be re-titled “Not the Mudblups Again”.

“This story shows the value of using your imagination and the value being neat.”

When Newton Gimmick introduces his newest invention, which turns the Airship into a shelter, he, Teddy, and Grubby set out to test it during the stormy season in the Great Desert. After a squabble over breakfast between Grubby and Gimmick--which Teddy quickly mediates, the team flies to the desert and are quickly captured by a group of Mudblups. As the storms begin to leak rain into their cell, Teddy suggests they cover themselves in mud, disguising themselves as Mudblups and making a daring escape back to the Airship.

The story begins with Teddy explaining that he, Newton Gimmick, and Grubby are headed to the Great Desert. Newton Gimmick has added a new feature to the Airship: a method for using the deflated airbag as a makeshift tent, which he insists on calling the “pliable habitat”. Grubby suggests that they eat breakfast before they set off, and begins to serve oatmeal. Meanwhile, while searching for his monkey wrench, Gimmick discovers something on his gyro distinguisher just as Grubby discovers something in his pot of oatmeal.

It turns out Gimmick’s monkey wrench has fallen into Grubby’s oatmeal while oatmeal has been smeared on Gimmick’s gyro distinguisher. The two begin to argue back and forth over who is sloppier and having to constantly clean up after one another until Teddy steps in, prompting them to apologize to one another and shake hands.

With the argument put to rest, the team takes off in the Airship and head to the Great Desert. Teddy remarks that he is still amazed at the Airship. Gimmick declares that every invention must begin with a little imagination. He begins to sing about many of his inventions that started with an imaginative idea but often evolved into something different than he may have initially intended (“Warm Up Your Imagination”).

The group finally lands in the Great Desert and begin the process of lowering the deflated airbag to form a roof for the Airship. Once complete, Gimmick suggests they stay overnight to see if they can survive inside the “pliable habitat”, even hoping that there might be a storm to put the Airship to the test. Knowing that they’re going to be there all night, Grubby’s first instinct is to scavenge for food.

During their search, the three find their way outside a cave similar to the one where they had been captured by Mudblups. Gimmick is quick to reassure the others that it is scientifically impossible for Mudblups to live this far north at the edge of the desert. Of course, that assurance is quickly dashed when they are surrounded by Mudblups!

Despite the friends’ best attempts to reason with their captors, they are quickly herded into a cell and locked up. Gimmick suspects they’ve encountered a new species of Mudblup, which is how they can be found this far north.

A few hours after being locked in the cell, the three hear a rainstorm begin overhead. After a few minutes, water begins leaking into the cell, turning the dirt floor to mud. As Grubby complains about his muddy feet, Teddy is suddenly struck with an imaginative plan to escape.

Teddy, Grubby, and Gimmick begin to cover themselves in mud, disguising themselves as Mudblups. They catch the attention of a Mudblup guard and convince him that they are three Mudblups who have been mistakenly imprisoned. The guard sets them free, and they begin to make their way through the cavernous tunnels toward the entrance, pretending to look for the presumed escaped prisoners.

Getting directions from a passing Mudblup, the three finally find the entrance and run out into the rain. The water quickly washes away their muddy disguises, and the Mudblups follow in hot pursuit. As Teddy and his friends reach the Airship, the dawning sun rises, sending the Mudblups scrambling back into their tunnels: their eyes unaccustomed to the bright light.

The “pliable habitat” is found to be nice and dry despite the rain storm. As they dry off around the stove, Gimmick credits Teddy’s imagination for coming up with their escape plan and offers Grubby a more heartfelt apology for dropping his monkey wrench in the oatmeal the day before. Grubby in turn apologizes once more for getting oatmeal on Gimmick’s gyro distinguisher. Compared to Mudblups, Gimmick is an excellent housekeeper!

The Airship heads back to Gimmick’s house as Teddy, Grubby, and Gimmick sing about the sloppiness of the Mudblups (“The Mudblup Song”).