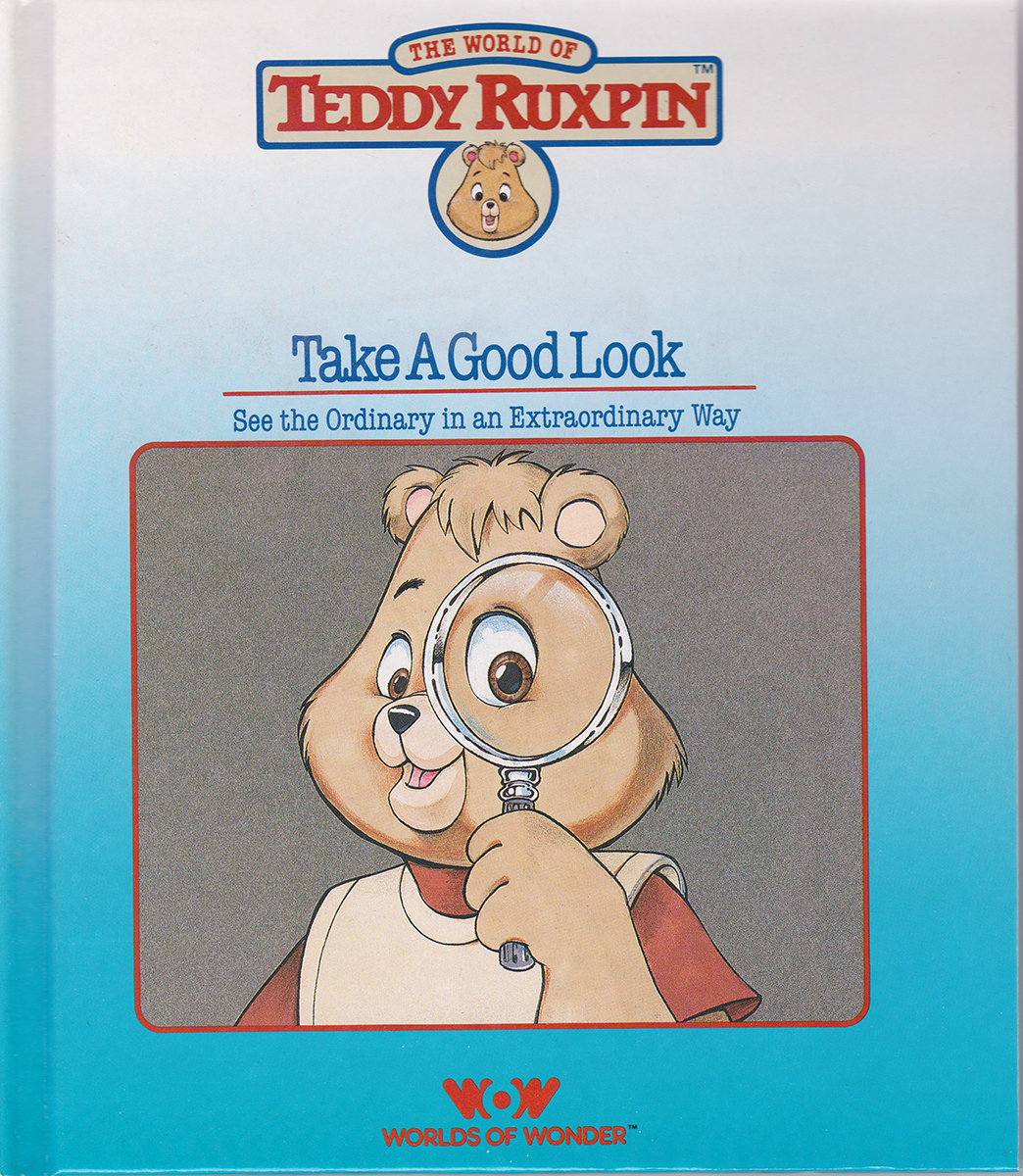 See the Ordinary in an Extraordinary Way

And since then, I think we all understand that even though something might be small, it can still be very important.

“Take A Good Look” is one of the original stories for The World of Teddy Ruxpin Adventure Series. Following the Airship, it features the first of Gimmick’s inventions and the adventure it creates. The story also introduces Fuzz the Fob as Gimmick’s pet.

The story is notable for featuring photographs taken by Don Reidel to illustrate the perspective gained by Teddy and his friends when they are shrunk to microscopic size.

"This story shows that even tiny things are important and that we must all take good care of the world."

In “Take A Good Look”, Gimmick attempts to demonstrate his new invention: a reducing machine capable of shrinking objects down to almost microscopic size. His plans backfire when he suddenly realizes the remote control for the machine has not shrunk with them, leaving he, Teddy, and Grubby scrambling for a plan to get back to their normal size. As they explore the world of Gimmick’s house from their new perspective, they inadvertently attract the attention of Gimmick’s now gargantuan pet Fob, Fuzz, whom they must avoid at all costs if they’re to ever return to their proper size.

When Teddy and Grubby return to Gimmick’s house after gathering food, they find the inventor overjoyed at his new invention. Gimmick explains that he’s been able to repurprose his “artificial sunlight machine” by plugging one of the Crystals from the Hard-to-Find City into it, which caused the machine to work. However, rather than creating artificial sunlight, the machine instead became a reducing machine: allowing it to shrink anything within a given radius to a fraction of its normal size. There is a catch, though: the machine can’t reduce anything made of “copper, bronze, or certain alloys”.

Gimmick has already tested the machine on many objects during Teddy and Grubby’s excursions, and now he’s ready to test it on living people: namely he, Teddy, and Grubby! Grubby grows increasingly nervous, but Teddy and Gimmick manage to convince him to stay. After checking that they are not carrying any copper, bronze, or certain alloys, Gimmick activates the machine, which miraculously shrinks the three friends down to less than an inch high!

There is one thing that didn’t shrink: the remote device, which Gimmick realizes is constructed of “copper, bronze, and certain alloys”. Suddenly they hear a babbling sound see Gimmick’s pet Fob, Fuzz, coming their way. The normally cuddly Fuzz is gigantic compared to the three friends at this size, and he begins to creep up on them as though ready to pounce! Teddy, Grubby, and Gimmick take cover under the couch, but Fuzz takes up a lookout post and refuses to leave. Grubby suggests they ascend into the couch via an exposed spring; surely Fuzz wouldn’t find them in there.

The three emerge from another hole in the top of the couch and make their way over to Gimmick’s dinner table where they find an enormous pencil and a banquet of giant food. As Grubby continues eating, they run into other huge objects like a spool of thread, a flower, grains of salt, and a bowl of sugar.

While they investigate the sugar, a giant housefly swoops down to feast on it, causing the three to dive for cover. They notice that Fuzz has vacated his post by the couch, which clears the way for them to head back to the Reducing Machine and its remote device via the path through the couch.

Teddy and Grubby hoist Gimmick onto the remote, but Gimmick isn’t strong enough to push the enormous button down himself. Teddy tries to help, but even their combined strength proves futile. As Grubby climbs up to help, the sleeping Fuzz wakes up and makes his way across the room.

As Fuzz closes in, the three friends jump up and down the remote, trying to press the button. At the last minute, Fuzz launches himself into the air. Teddy, Grubby, and Gimmick all move out of the way as Fuzz comes crashing down on the remote, managing to push the button and restoring the three to their normal size.

Unfortunately, while restoring Teddy, Grubby, and Gimmick to normal size, the device also turned Fuzz into a giant Fob! Worse yet, he’s sitting on the remote! Teddy manages to lift Fuzz’s tail and press the red button, returning Fuzz to his more cuddly size.

Teddy and Grubby congratulate Gimmick on his invention’s success and reminisce on their adventure (“Take A Good Look”).