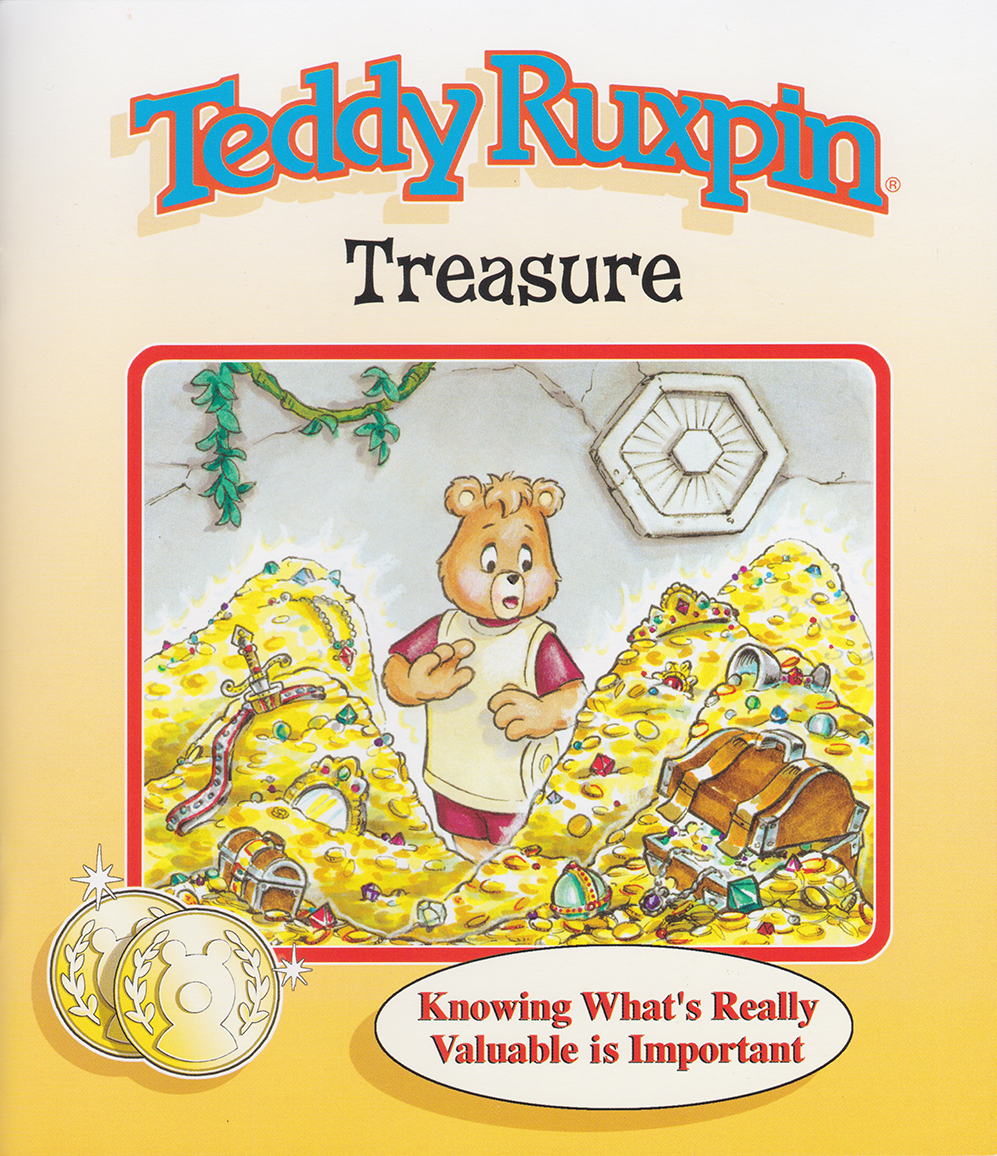 Only the pure of spirit may find the treasure of knowledge.

“The Treasure” is a story from the World of Teddy Ruxpin Adventure Series and is a re-imagining of parts of the 1985 version of “The Missing Princess”. It was released for the BackPack Toys Teddy Ruxpin talking toy.

The story expands the original version of “The Missing Princess” to include elements of the 1985 “The Adventures of Teddy Ruxpin” ABC Live Action Special. It uses soundbites from that production to expand the narrative regarding the search for the Treasure of Grundo and Tweeg’s efforts to foil that plan.

While the discovery of the Treasure of Grundo was shown in the ABC Live Action Special and “The Adventures of Teddy Ruxpin” animated series, it was completely omitted from the original Adventure Series, despite the Crystals playing prominent roles in that series. This marks the first time the Treasure of Grundo was shown in any version of the Adventure Series. Considering how much new material was covered, this also marks the most original content for “The Airship” and “The Missing Princess” story arcs since their debut in 1985.

Like every entry in the BackPack Toys series, two books were issued for “The Treasure”: one picture book and one containing the entire text of the story. The picture book is noted for not only using some of the original art of the 1985 edition of “The Missing Princess”, but also updated many of its character models to conform more closely to their later renditions, such as Grubby’s appearance becoming more rounded and less angular and bug-like. Meanwhile, several pages of brand new art were created to accompany the expanded narrative.

Having liberated Princess Aruzia from her cell, Teddy and his friends make their way back to the Airship when they stumble upon the location of the Treasure of Grundo. As a lifetime’s worth of riches is revealed, the group is instead drawn to a pedestal containing six crystals. They abandon the gold and make their escape just as the alarm sounds that Aruzia is missing. A harrowing air battle ensues as the Airship fends off a fleet of Gutang flying machines and the Wooly What’s-It comes to their rescue. Meanwhile, Tweeg find their own secret to the Treasure of Grundo as Teddy and his friends escort Prince Arin and Princess Aruzia back home.

The voice of Leota the Woodsprite introduces the title of the story before Teddy begins to sing (“Come Dream With Me Tonight” (Introduction)).

Teddy recalls that they’d saved Princess Aruzia and were making their way out of the Hard-to-Find City and back to the Airship when Teddy suddenly recognized one of the buildings: the shrine from the treasure map! Everyone heads inside.

The pavilion is largely empty, but there on the wall is the other half of Teddy’s medallion! Teddy takes his half over and places it next to the one on the wall. The two halves fit seamlessly together and the full text is revealed:

Only the pure of spirit may find the treasure of knowledge.

Suddenly, the two halves fuse together and fall into Teddy’s hands.

The crystals on the medallion begin to glow and suddenly mounds of jewels and riches fill the chamber.

The group gathers around a large pedestal in the center of the room that bears the same shape as the medallion. Like the medallion, it bears six crystals on its edges. The crystals rise from the pedestal before each of them. There are words etched into each one:

Without hesitating, the group takes the crystals and leaves the shrine and heads back towards the Airship.

Tweeg and L.B. spot the group as they leave the shrine, and head inside. Tweeg is ecstatic at all the riches Teddy and his friends have left behind and declares triumphantly that he’s finally rich.

Meanwhile, an alarm begins to sound through the Hard-to-Find City, signalling that the Gutangs are finally aware that Princess Aruzia has been freed. Teddy and the others scramble back to the Airship and lift off.

As they do, they see the Gutangs launching their own aircraft to pursue them!

The Gutangs begin firing arrows and rocks at the Airship, finally launching a giant boulder that knocks the propeller clear off the Airship! With no way to propel forward or steer, the Airship begins drifting back towards the City.

Teddy instructs Grubby to bring out his batch of Root Stew, and Teddy loads a spoonful of the stew into a slingshot. He takes aim and manages to fire the stew directly into one of the Gutang pilots in the face. Prince Arin follows Teddy’s lead and manages to hit another Gutang in the eye. The blinded pilots begin to crash into the valley far below.

Grubby continues feeding ammunition to Teddy and Prince Arin, but the Gutangs launch one plane after another. Finally, the Wooly What’s-It appears on the launching pad, having scaled the Treacherous Mountains himself! He begins to chase the Gutangs away and breaking all their airplanes. Meanwhile, Teddy and the crew continue to fend off the flying machines circling the Airship.

A final plane circles the Airship, but Grubby has run completely out of Root Stew! With no other defense, the plane circles a final time near the launching pad, where Wooly jumps onto it. Encumbered by Wooly’s weight, the plane crashes into the valley.

The crew set the Airship down and run to Wooly’s aid. Wooly comes to, and Princess Aruzia thanks him and everyone else for coming to rescue her.

The group celebrates its victory, and Aruzia rewards Wooly with a kiss.

Grubby laments the treasure they left behind, but Teddy believes the six crystals they’ve recovered are somehow more important than all that treasure combined. He mentions that whatever they learn from the crystals will make the rest of that treasure seem “like just an illusion.”

Meanwhile, Tweeg is reveling in his riches when suddenly it all disappears.

Teddy and his friends fly the Airship over Grundo, and Arin is able to direct them back to King Nogburt’s Castle (“Come Dream With Me Tonight” (Excerpt)).

The Airship flies over Grundo as Teddy and Grubby celebrate heading off toward another adventure around the next corner (“Come and Discover”).