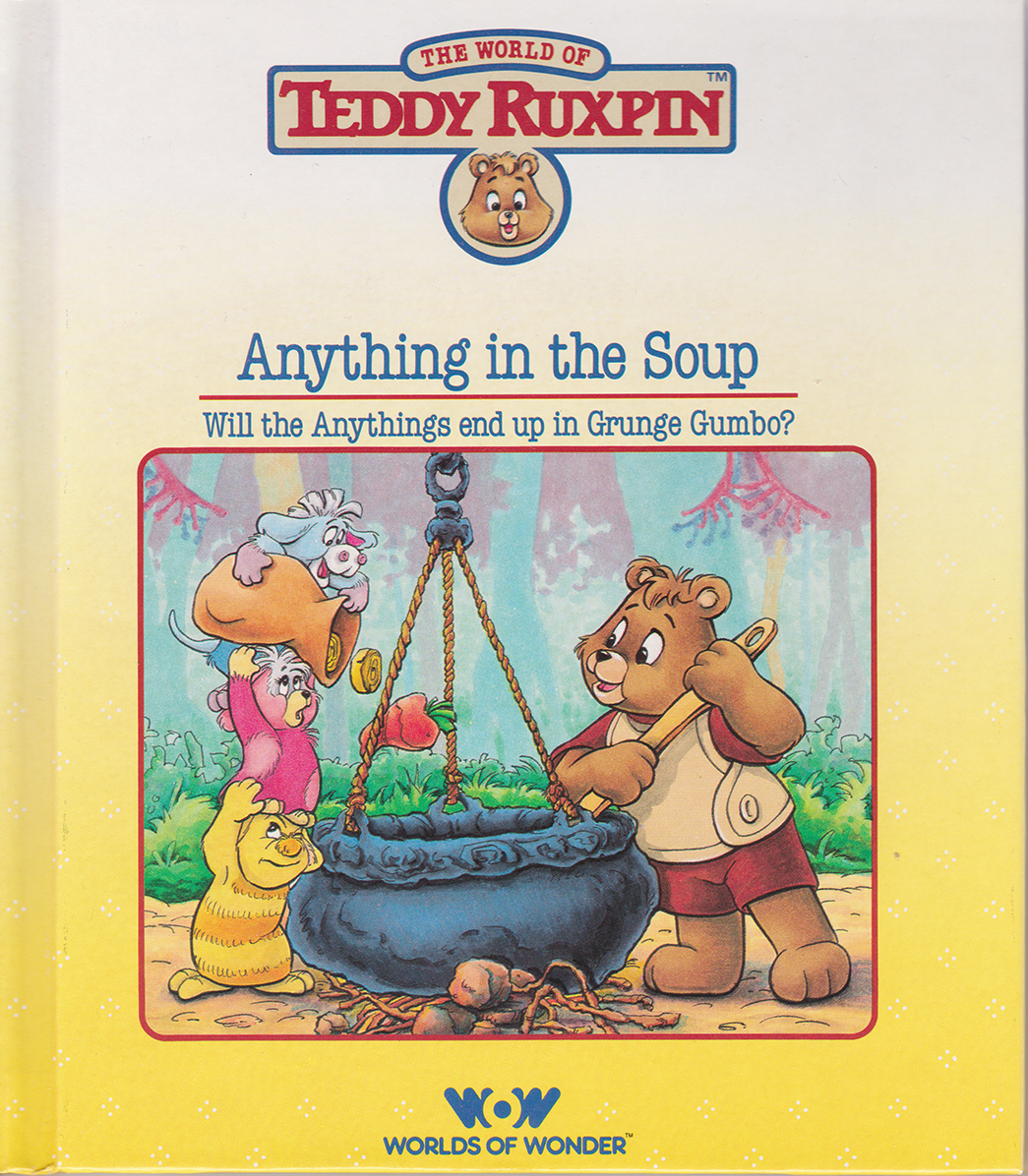 "Anything in the Soup"

Will the Anythings end up in Grunge Gumbo?

...that onion is our friend!

“Anything in the Soup” is a story from the World of Teddy Ruxpin Adventure Series. It was released for the first and second generation Worlds of Wonder Teddy Ruxpin talking toy. The story marks the second appearance of the Anythings since their introduction in “The Mushroom Forest”.

“ This story shows the value of using a little ingenuity to help your friends in a time of need.”

Teddy, Grubby, and Gimmick arrive in the Grunge Village where the Grunges reveal that their vegetables have been disappearing. Gimmick has conconted a trap to catch the thieves, but ends up ensnared by his own device. Meanwhile, Teddy and Grubby find their friends the Anythings, who believe some of their friends may have transformed into vegetables to hide in their surroundings and are now in danger of being used as ingredients in the next batch of gumbo!

As Teddy prepares to tell the story, Grubby tries to interrupt several times, much to Teddy’s dismay. But Teddy has always encouraged Grubby to speak up when something is wrong, and Grubby tells Teddy that the soup Teddy is preparing is burning on the stove! He takes the soup off the stove for Teddy, and after thanking Grubby, Teddy continues with the story, which shows the value of “speaking up”.

The story begins with Teddy, Grubby, and Newton Gimmick arriving in the Jungle With No Name where Gimmick hopes to demonstrate his latest invention: a trap to catch the Grunges’ alleged vegetable thief! With their vegetables disappearing, it’s becoming increasingly difficult to gather enough ingredients to prepare their famous Grunge Gumbo (“Grunge Gumbo”).

As Gimmick attempts to show the Grunges how his new invention works, he accidentally triggers his own trap, and winds up dangling from a net hanging from a tree with no clear way to get down.

Meanwhile, nearby, Teddy and Grubby begin to hear tiny voices calling for help. They discover the sounds are coming from nearby mushrooms, flowers, and rocks, and deduce that it must be their friends the Anythings: This, That, and The Other. The Anythings spring out of hiding, transforming into their usual shapes. When one of the Grunges mentions they are trying to catch a vegetable thief, the Anythings grow suddenly anxious and try to leave. Teddy and Grubby convince them to stay and explain what’s going on.

The Anythings explain that ever since meeting Teddy and his friends in the Mushroom Forest, they’ve been getting braver ever since, and decided to venture out and explore Grundo. They stumbled onto the Grunges’ vegetable patch where they began to pick vegetables to eat, not realizing they were stealing. When the Grunges arrived, many of the Anythings got scared and tried to disguise themselves by turning into vegetables. This seemed to work until some of their friends got picked!

Grubby insists he knows how to fly the Airship well enough for he and Teddy to do it themselves, and the two gather the This, That, and The Other aboard the Airship and set off for the Grunge Village.

As the Airship begins an erratic flight to the Grunge Village, the Anythings who had been picked are being lined up so they can be added to the Grunge Gumbo. They’re doing their best to stall by sneaking to the back of the vegetable line, but they are running out of time. As one of the Grunges picks up an Anything disguised as a carrot, presumably to begin slicing, the Grunge is astonished when the carrot suddenly transforms into a tomato!

The Anythings continue transforming into various vegetables to confound the Grunges. The Grunge Chef becomes exasperated and insists on just throwing anything into the pot. The Airship arrives just as the Grunges are preparing to throw the remaining “vegetables” into the soup, and Teddy and Grubby try to tell the Grunges what’s going on. But the Grunges can’t hear them, and Teddy and Grubby can’t manage to land the Airship. Instead, This, That, and The Other call to their friends to speak up if they don’t want to be cooked, and the Anything vegetables begin to mumble enough to get the Grunges’ attention.

Teddy and Grubby manage to crash land the Airship nearby and explain what was about to happen. The Grunges apologize and explain that the Anythings should’ve said something sooner or they would’ve wound up in the soup. The Anythings are ashamed of being too timid to say something, and Teddy reminds them that they should never be too afraid to speak up if they know something bad is about to happen to them (“Speak Up”).

Suddenly Gimmick arrives, calling out for the Grunges to stop the preparations of their Gumbo. Teddy and Grubby assure him that everything is fine before asking how he managed to get out of the trap. Gimmick replies that he managed to cut the net with his portable knife, and then succumbed to “the law of gravitational necessity”.

The group laughs together and the story ends ("Speak Up (Reprise)"). Back to top