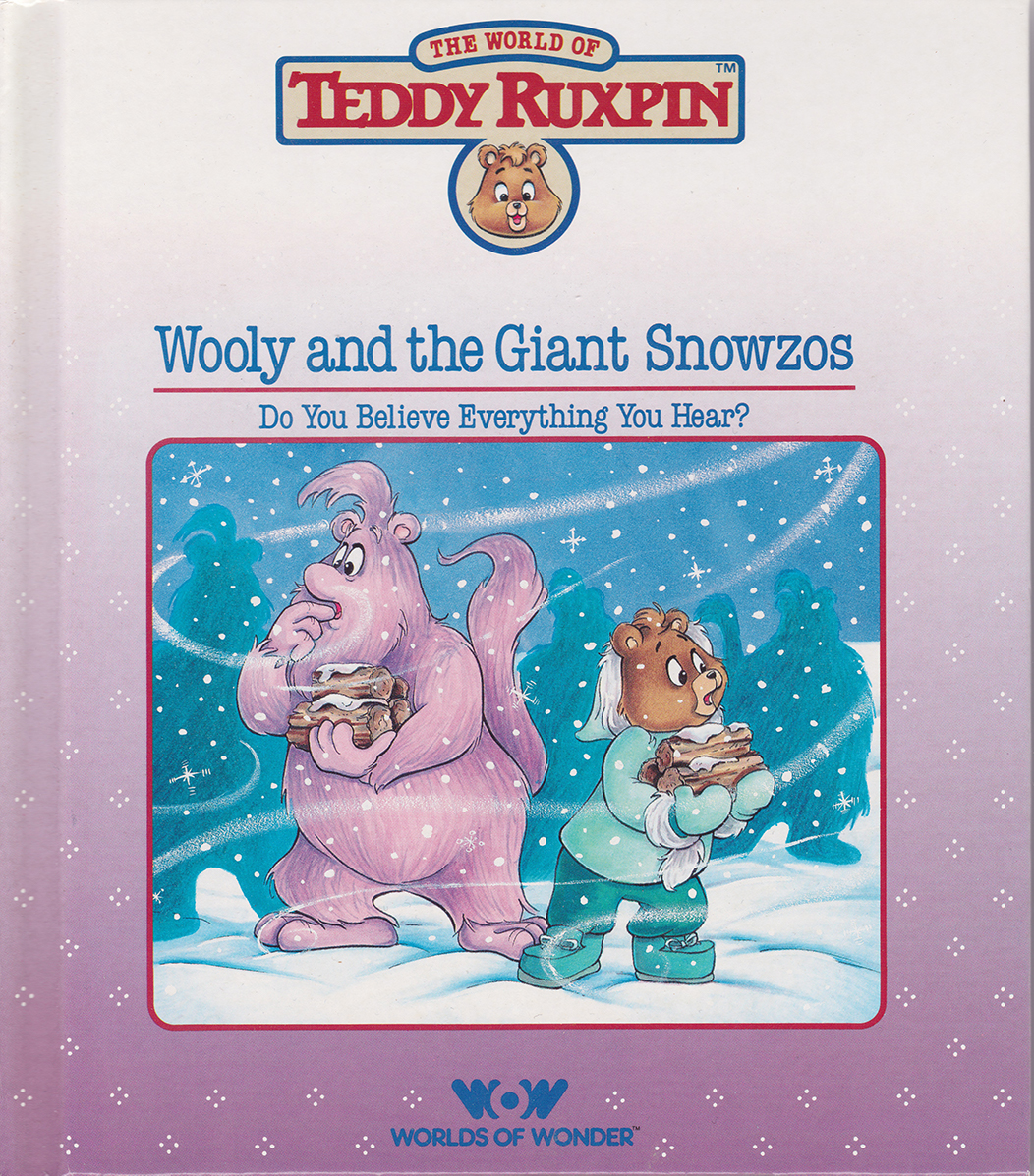 "Wooly and the Giant Snowzos"

Do You Believe Everything You Hear?

All things must be proven before reaching a conclusion...

“Wooly and the Giant Snowzos” is a story from the World of Teddy Ruxpin Adventure Series. It was released for the Worlds of Wonder and Playskool Teddy Ruxpin talking toy. The story is notable for introducing the race of Snowzos, of which Wooly is a descendant.

“This story illustrates the importance of questioning rumors and facing the unknown with an open mind.”

While attending a winter dinner at Wooly’s house, Teddy and his friends are frightened by a persistent ghostly roar they hear in the midst of the blizzard around them. As more and more friends arrive, they become more frightened, their hysteria confirming each other’s worst fears. When the sounds turns out to be that of the giant Snowzo, they all end up making new friends, and a secret is revealed about Wooly’s heritage.

The story begins on one of the snowiest days in the history of Grundo as Teddy, Grubby, Gimmick, and Fuzz the Fob fly the Airship to the Wooly What’s-It’s house to attend a special winter dinner. Upon landing, they hear a strange, wild sound coming from somewhere in the distance. Gimmick believes it to be the wind as they tie down the Airship and head inside Wooly’s house to warm up.

Grubby takes an especially long time to come inside as he must remove each of his six snow boots. As he removes the last one, everyone again hears a strange sound outside. Gimmick begins to laugh, remembering a winter of his youth and they were visited by the “giant Snowzos”! This begins to set the group on edge, but Gimmick assures them that the Snowzos are simply made up.

Gimmick explains how the legend of the Snowzos spread as each person believed to have seen a Snowzo for themselves. Luckily, none of them were ever proven to be real. This does little to assure Fuzz, who is beginning to get scared.

After dinner, there’s a knock at the door and two Fobs hurry inside, claiming they’ve heard the strange sound as well and fear it is the dreaded Snowzos, much to Gimmick’s amusement. A few minutes later, Gramps and Wiggs Woggley arrive as well, claiming they actually saw a Snowzo out in the storm!

Gimmick doesn’t believe them, and tries to reassure them that they are safe under Wooly’s protection. But Wooly is hiding under the table! Grubby initially chides Wooly for being scared, but soon decides to join him. Soon, everyone is hiding with Wooly under the table as Gimmick seems bemused by their foolishness.

The door opens once more, and this time Leota the Woodsprite arrives, claiming her students are all terrified of the Snowzo. Soon, everyone is crowded under the table. Gimmick encourages them to pull themselves together and not to believe everything they’ve heard (“Don’t Believe Everything You Hear”).

This seems to put everyone at ease until Leota reminds Gimmick that he had once told her Woodsprites didn’t exist either. Dismissing that memory, Gimmick gets everyone to sit around the fire and have some hot Grundleberry Juice.

Teddy realizes they are out of firewood and everyone is eager to volunteer Gimmick to go out and get more, which leaves the inventor quite flustered. Teddy agrees to go out on his behalf, and Wooly agrees to help. Grubby volunteers, but Teddy doesn’t want to wait for him to put all his boots back on, so he and Wooly set out to get the firewood themselves.

The blizzard has kicked up to the point where it’s become very hard to see, but they find Wooly’s wood pile. Wooly asks Teddy to hand him some logs, and Teddy begins to count them out as he hands them over. But Wooly seems frustrated and asks again for Teddy to hand him some more logs. Teddy counts out even more, and when Wooly insists yet again, Teddy hands over several more logs. With their arms full, the two head back inside.

When they get inside, everyone starts laughing: Wooly is completely white, covered with snow! Everyone starts to try brushing the snow off, but it won’t come off.

A moment later, the door opens and in comes...Wooly! He’s irate that Teddy abandoned him out there in the storm alone. The group stares in wonder as both Woolies stand side by side until they suddenly realize the “white Wooly” is actually a giant Snowzo!

As the group begins to panic, the Snowzo introduces himself and assures them he means them no harm (“A Typical Giant Snowzo”). The Snowzo explains that they come from a land north of Ying and only venture this far south when the weather is particularly frigid.

When Teddy remarks that the Snowzo sounds just like Wooly, he explains that there is a legend of a young Snowzo who was lost long ago and had not been seen since. He proposes that Wooly could be that lost Snowzo.

With this revelation, the Snowzo introduces the group to his family, who have been waiting outside. He calls them over and they stand outside and converse with the Snowzos, who invite Wooly to visit them. Wooly agrees to visit when the weather is warmer.

Teddy and Grubby reflect on the story of the Snowzos, and Grubby jokes that Snowzos like to say “brrrrr” because they’re always cold!