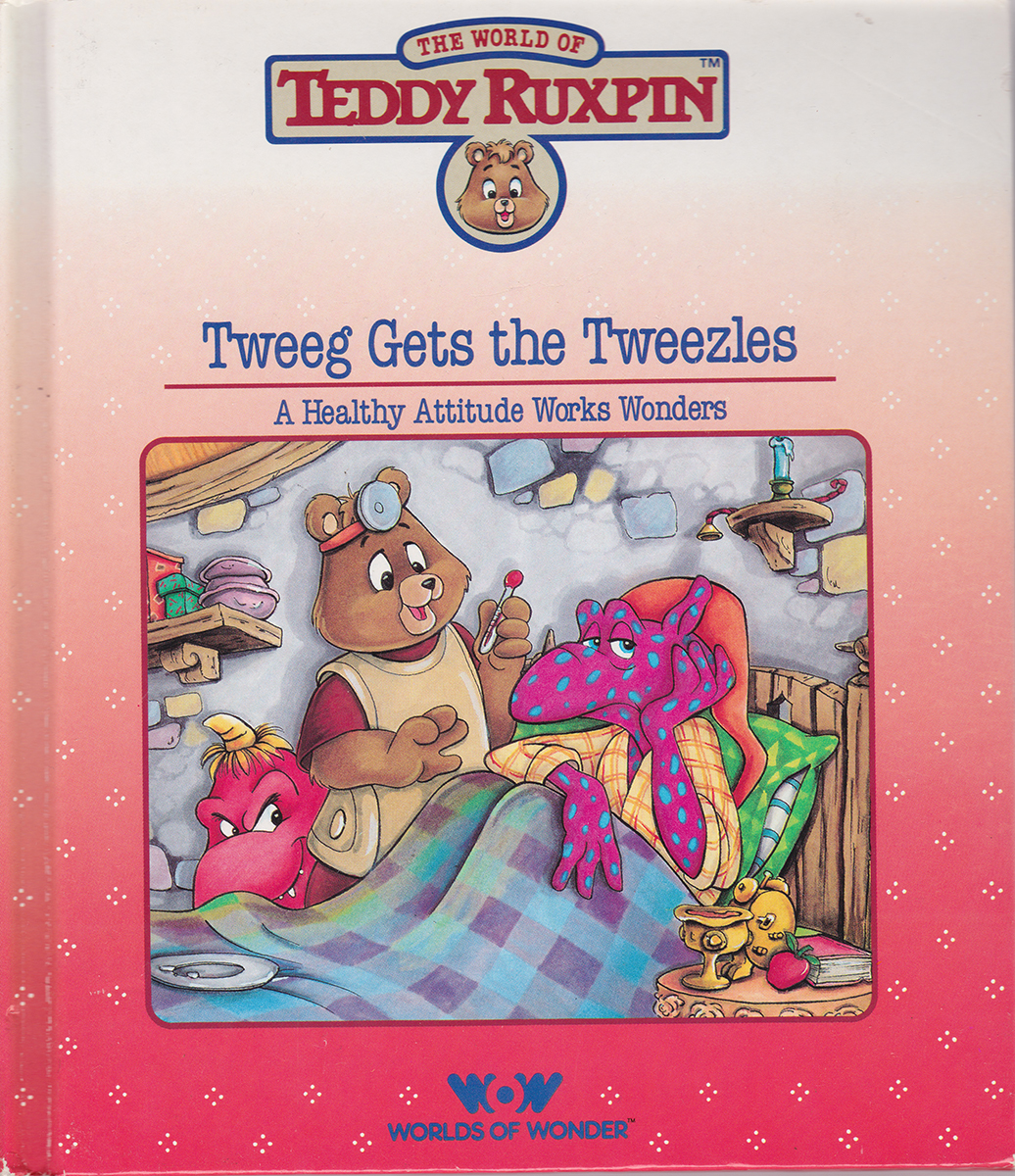 Yeah, Tweeze, you even make yourself sick!

“Tweeg Gets the Tweezles” is a story from the World of Teddy Ruxpin Adventure Series. It was released for the first and second generation Worlds of Wonder Teddy Ruxpin talking toy. The story is notable for being largely comedic in nature, and features Teddy and his friends helping an otherwise notorious enemy in Tweeg.

“This story shows the value of being a good neighbor and the importance of a positive attitude.”

When Tweeg believes he has contracted a rare disease called the “Tweezles”, he sends L.B. out to find help in obtaining a cure. Naturally, L.B. enlists the aid of their neighbors, Teddy, Grubby, and Gimmick, who reluctantly agree to help.

Teddy greets the listener before asking Grubby how he is feeling. Grubby replies that he’s feeling good, and Teddy begins to tell the story of the time Tweeg wasn’t feeling good at all.

The scene shifts to Tweeg waking up to an alarm clock in his tower. L.B. arrives and the two seem excited by the prospect of another day to be mischievous; a notion that is baffling to both Teddy and Grubby.

Suddenly Tweeg looks in the mirror and discovers his complexion has turned to a raspberry red with blue spots dotted about his face. L.B. is marveled by this and asks how Tweeg managed to look like that, but Tweeg insists it wasn’t deliberate. Unable to wash off the color or spots, he concludes that he must certainly be sick, and L.B. suggests he may have “the Tweezles”. Aghast, Tweeg begins to talk of the symptoms he’s experiencing, and while Teddy and Grubby have never heard of the Tweezles, Tweeg takes to bed to recuperate.

When L.B. is unable to help, Tweeg insists he go out and find someone who can. Naturally, L.B. wanders over to Gimmick’s house. Gimmick is shocked to find a Bounder shambling up to his porch, and calls Teddy and Grubby. Teddy recognizes L.B. who explains that Tweeg is sick and wants someone to come help. While Gimmick and Grubby are initially reluctant, Teddy convinces them that helping Tweeg is the right and neighborly thing to do (“Be A Good Neighbor”).

The trio arrive at Tweeg’s Tower. Tweeg is initially outraged that L.B. would bring Gimmick and his friends to help. Sufficiently offended, Gimmick threatens to leave, but Tweeg decides he’d rather put up with them if it means he might be cured.

Teddy admits they’re not entirely sure what to do, but Grubby suggests they let him make a pot of “boiled root soup”, a special Octopede remedy. L.B. goes out to dig up enough roots to make the soup, and Grubby prepares it for Tweeg. He starts to feed the soup to Tweeg, but Tweeg quickly spits it out, complaining it doesn’t taste good at all.

Next, Gimmick makes a “mustard plaster”. Unlike Grubby’s remedy, this is a concoction meant to be spread across the patient’s chest. Gimmick begins to administer the plaster, and Tweeg is initially comforted by how warm it is. Unfortunately, the temperature quickly begins to rise until Tweeg’s chest is burning! Tweeg scurries out of bed as the three friends try to clear the plaster from his chest. When his chest continues to burn, L.B. grabs a bucket of water and splashes it over Tweeg.

It’s then that Grubby notices the color of the water in the bucket, and L.B. confirms it was gathered from Rainbow Falls!

The trio quickly conclude that Tweeg does not, in fact, have the “Tweezles”. The discoloration of his skin is actually a side effect of drinking the water from Rainbow Falls.

When Gimmick asks what the Tweezles are, L.B. admits he has no idea. Tweeg is enraged to find that L.B. had simply made up the idea of the Tweezles based on Tweeg saying he felt sick. Teddy explains that you can often make yourself feel sick simply by thinking you have come down with something (“A Healthy Attitude”).

Having been “cured”, Tweeg quickly returns to his old self and kicks Teddy and his friends out of the Tower.

Teddy, Grubby, and Gimmick return home and think about how easy it is for someone to convince themselves they are sick. Conversely, having a healthy attitude can help someone feel better (“A Healthy Attitude (Reprise)”).