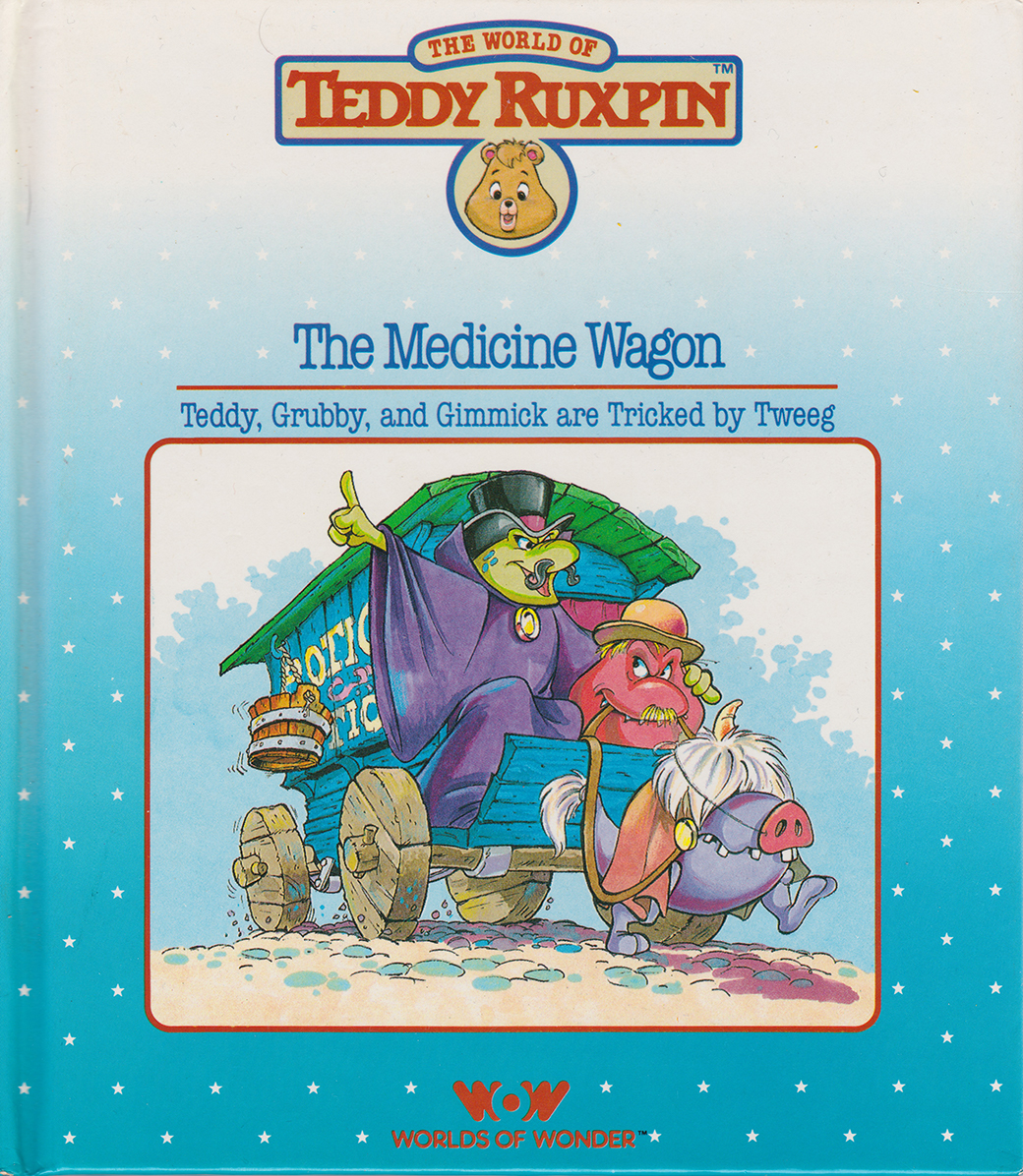 Teddy, Grubby, and Gimmick are Tricked by Tweeg

Y’know, sometimes we all do things that we don’t want to remember.

“The Medicine Wagon” is a story from the World of Teddy Ruxpin Adventure Series. It was released for the original Worlds of Wonder Teddy Ruxpin talking toy. The story is a prime example of one of Tweeg’s schemes to get rich at Teddy and his friends’ expense while also providing a clear anti-drug message to children.

“This story tells children to be very careful about medicines, and that only their parents know what’s good for them.”

When Tweeg goes broke, L.B. suggests he sell some of his belongings, including a book of magic potions. Tweeg devises an idea to swindle people out of their money by selling “medicine” to them based on some of the spells in the book and constructs a medicine wagon to travel in. His first victims are Teddy, Grubby, and Gimmick, who each buy a supposed remedy for a condition Tweeg convinces them they have. In the end, the remedies seem to cause more harm than good, and while Tweeg gets away with what little payment was given, the trio resolve never to take anything from strangers.

When Teddy begins to tell the story of “Tweeg’s medicine wagon,” Grubby and Gimmick hurry to stop him, seemingly embarrassed. Teddy admits that the story is embarrassing for him, too, but no less important to tell.

He starts by explaining that Tweeg had run out of money, and we join Tweeg in his tower, poor and inconsolable. L.B. suggests that Tweeg try to sell some of the clutter around the tower, pointing to a seemingly useless book of magic potions. Suddenly giddy, Tweeg rejoices as he conjures up an idea to make money: a medicine wagon.

Grubby interrupts the scene, hoping to prevent the story from moving forward, and he and Gimmick suggest they sing a song instead. But the song Teddy wants to sing is the song of Tweeg’s medicine wagon! (“Medicine Wagon”)

The trio are sitting on Gimmick’s porch eating lunch when Tweeg, disguised as a traveling salesman, arrives in a wagon pulled by an equally camouflaged L.B. When Tweeg offers them cures for any ailments they may have, Teddy initially declines, explaining they are feeling perfectly fine. Tweeg suddenly feigns being startled by Grubby’s appearance and insists that the Octopede is a hideous creature. Affronted by the salesman’s audacity, Gimmick tries to defend Grubby, but the salesman only notes Gimmick’s baldness as yet another deformity to be cured.

Teddy introduces them to the salesman who calls him “Shorty Ruxpin” before launching into a sales pitch for a potion to make Grubby handsome. Teddy assures Grubby he likes him the way he is, but Grubby eventually agrees to try a bottle of the potion, which is fetched by L.B., whom Tweeg addresses as “Lorenzo”. The salesman moves on to Gimmick, who stoutly refuses any sale but is quickly convinced when the salesman claims to have a jar of magic gunk that’s guaranteed to make hair grow on any surface.

The salesman laments that he has nothing to sell to Teddy, but L.B. quickly reminds him of the “gravitational body-extender thing-a-mabob”. The salesman explains that this is just the tool to cure Teddy’s chronic lack of height, and Teddy reluctantly takes it at Grubby’s encouragement.

Having sold each friend a cure, the salesman asks for fourteen pieces of silver. Teddy regrets they only have one, but Grubby reminds him that was spent the day before. The salesman seems willing to trade and Gimmick offers a jar of nutmeg, a few bags of flower, and a couple of bottles of buttermilk in return, which the salesman eagerly accepts before taking his leave.

When the salesman is gone, the three friends try the products they’ve purchased. Grubby swallows the bottle of potion, which tastes terrible. Gimmick opens his jar of gunk and follows the directions to spread a layer of it across his head. Meanwhile, Teddy is trying to hold the body-extender over his head, but the stone hanging from the end of it keeps hitting him on the head. He stops using it long enough to notice the Grubby has now turned completely green! Suddenly they begin to hear a series of popping sounds coming from the top of Gimmick’s head and discover that flowers are beginning to grow from the gunk on his scalp.

While Gimmick doesn’t seem to mind the look of his new “hair”, he is quickly attacked by a swarm of bees, causing them all to run inside. While Teddy nurses a growing headache, Grubby grows more distressed at his new green pigmentation and Gimmick cannot seem to stop his new “garden” from growing.

The three friends decide to take a closer look at what they’ve bought, and quickly discover that the “gunk” Gimmick bought was little more than dirt and water, which he plants in his real garden. Teddy’s gravitational body-extender is little more than a rock hanging from a string tied to a stick. And Grubby’s color eventually returns to normal.

Realizing they’ve been tricked by Tweeg and embarrassed at their foolishness, they bury their “medicine” and resolve never to take anything from strangers (“Medicine”).