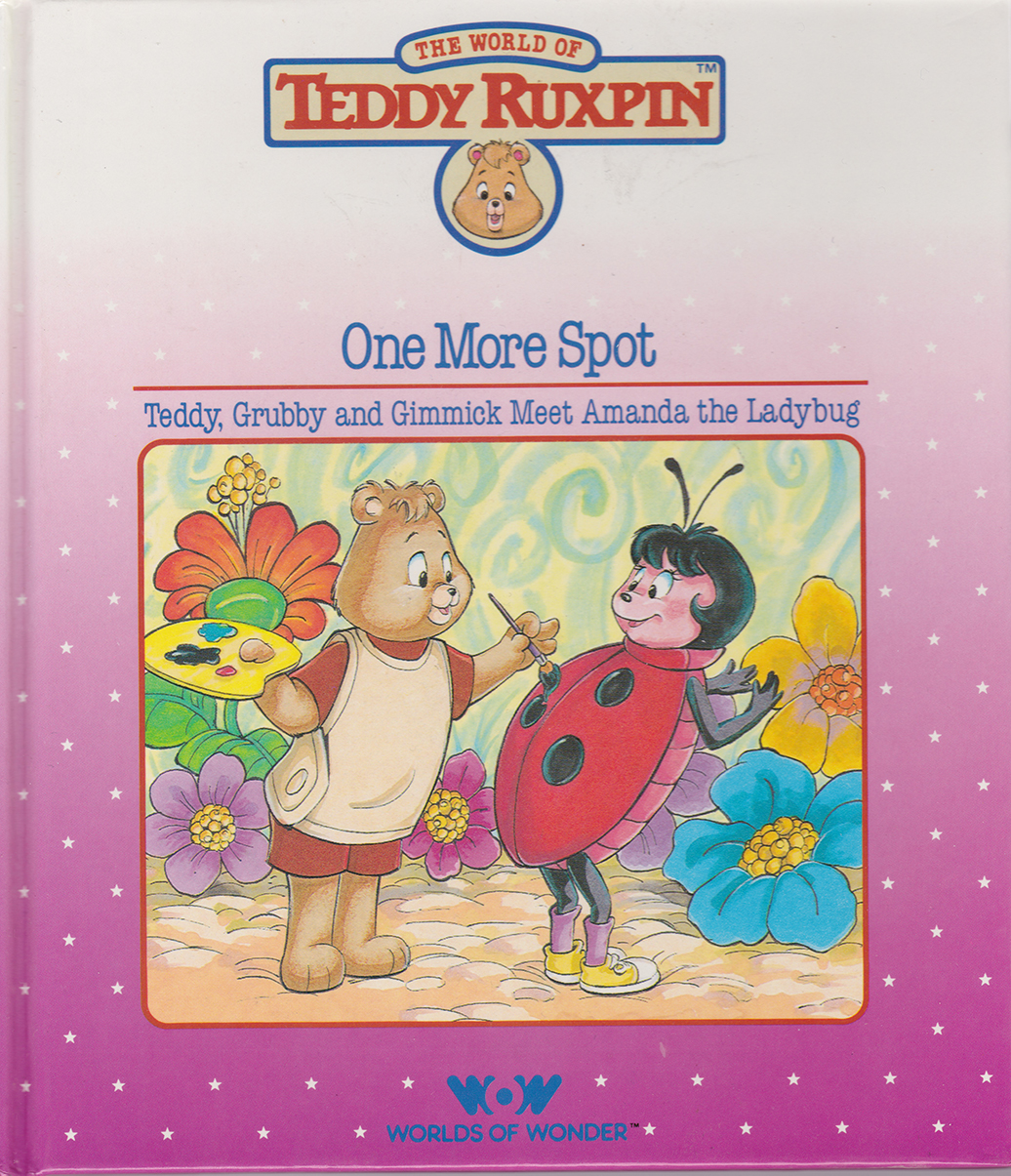 ...winning friendship is more improtant than winning anything!

“One More Spot” is a story from the World of Teddy Ruxpin Adventure Series. It was released for the first-generation Worlds of Wonder Teddy Ruxpin talking toy. The story builds on the use of the reducing and enlarging Crystal, which was introduced in “Take A Good Look” and “Grubby’s Romance”. The story also introduces Amanda the Ladybug.

“This story shows that the best reward for doing a good deed is the special feeling you get inside.”

When Teddy, Grubby, and Gimmick’s picnic is invaded by a troop of ladybugs, their leader Amanda invites them to the annual Bug Fair as compensation. Amanda is trying to do a good deed to earn a new spot, bestowed each year at the festival. Despairing that she is running out of chances, she is surprised to find that she has earned three new spots for making three new friends and making sure they have a good time.

Teddy begins by explaining that you can meet new friends in new and unexpected ways and tries to keep Grubby from spoiling the story.

Teddy recalls that it started on a beautiful day when Gimmick suggested they go on a picnic. They gather up supplies and set off in the Airship. Soon they find a place to land and enjoy their lunch. But before they can eat, their food appears to be walking away. Grubby discovers that it’s being carried off by bugs, and Teddy identifies them as ladybugs (“The Bug March”).

Grubby and Teddy catch the lead ladybug’s attention and explain that the food the bugs are taking belongs to them. The leader initially disputes this, thinking she has found it on her own, but Teddy points out their blanket and picnic basket. The ladybug is embarrassed to see she has been stealing the food and agrees to set it down again. She dejectedly introduces herself as Amanda and explains that she had been hoping to get a new spot--awarded for doing a good deed--by taking all the food she’d found to the annual Bug Fair.

Despite her disappointment, Amanda invites Teddy, Grubby, and Gimmick to the Bug Fair, and Teddy eagerly accepts. Grubby even agrees to bring all their food to share at the fair. When Amanda realizes her new friends are much too big to go to the fair, Teddy suggests they use the portable Reducing Machine to shrink themselves down to size.

Now the appropriate size, the group begin transporting their food, which is now oversized and very heavy, to the Bug Fair. While Grubby is hopeful Amanda will get a new spot for taking all the food to the Bug Fair, she explains that the good deed must be something she does on her own.

Once they arrive at the fair, Amanda makes sure to introduce Teddy, Grubby, and Gimmick to all of her friends. They attend several events and exhibits, including a bug circus during which Grubby realizes everyone is eating the food they’d brought to share. Despite the fun events, Amanda’s disposition remains somber throughout the day, especially when the Annual Spot Awards begin and she realizes she is not getting a new spot this year. The trio assure her that even if she doesn’t get a new spot, she is still their friend, which helps to make her feel better.

That’s when the Bug Master of Ceremonies begins to talk about Amanda. He explains that even though this was Amanda’s last day to earn a new spot, she instead spent the day making sure her new friends had a good time, which is itself a good deed. And since she made three new friends, Amanda is awarded three new spots!

Amanda thanks Teddy, Grubby, and Gimmick, and they celebrate her new spots before heading back to the Airship. They assure Amanda that they will meet again and they will always be friends, and bid her farewell (“Do Good Deeds”).