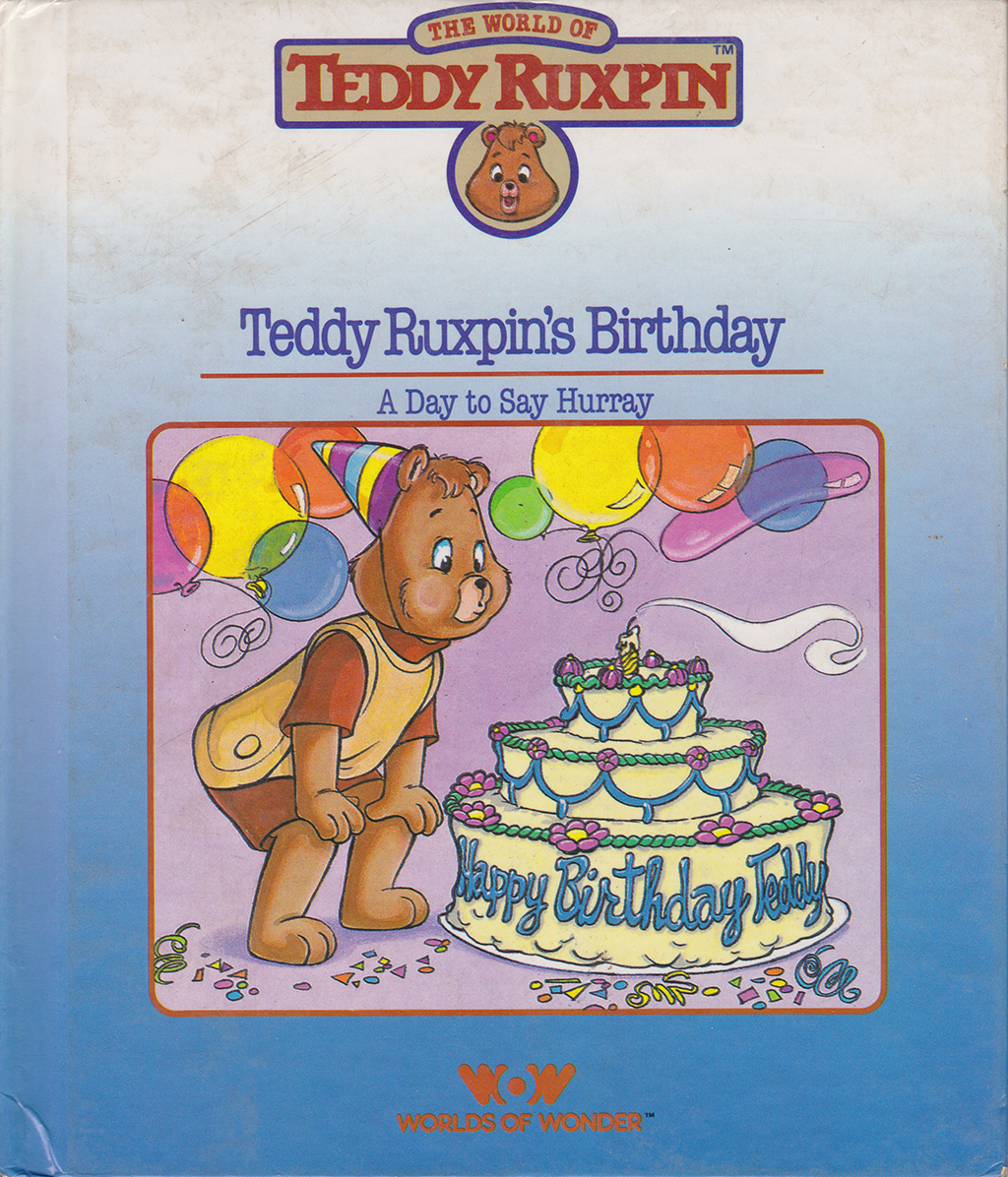 A Day to Say Hurray

Teddy, I keep tellin’ ya, I don’t forget anything!

“Teddy Ruxpin’s Birthday” is a story from “The World of Teddy Ruxpin” in which Teddy’s closest friends get together to throw Teddy a surprise birthday party. The story was released for the Worlds of Wonder (1st and 2nd Generation), BackPack Toys, and Wicked Cool Toys Teddy Ruxpin talking toys.

“This story shows that friends are important every day of the year.”

While Grubby insists he knows everything there is to know about his best friend Teddy, Newton Gimmick introduces his latest invention: turning the Airship into a “land sail”. They use this new invention to travel to Mizzley Meadows where they begin to encounter one after another of their friends. The Grunges arrive and start a game of Grungeball, which is won when Leota catches the final out. She awards the ball to Teddy, revealing that they have gathered as a surprise for Teddy’s birthday party, per Grubby’s invitation.

When Teddy introduces himself at the beginning of the story, Grubby laments that everyone already knows his name, and mentions that everyone probably knows a lot about him. Teddy suggests that even Grubby doesn’t know everything there is to know about him, or has maybe forgotten some of it, but Grubby assures him that could never happen.

Their conversation is interrupted by Newton Gimmick, who invites them outside to see his new invention. Gimmick explains that by lowering the deflated airbag, he can use it as a makeshift sail, creating a sort of “land sail” that allows the Airship to travel on land. He suggests they climb aboard and go for a ride, to which Teddy and Grubby excitedly agree.

With the breeze strong enough to propel the Airship forward, the crew take off through Grundo, and Grubby suggests they head for Mizzley Meadows (“Let’s Sail Away Today”). The crew anchor the Airship and decide to rest in Mizzley Meadows (“Come Dream With Me Tonight” (Verse)). Teddy asks again if Grubby is sure he knows everything about him, and Grubby insists he does.

Suddenly they see the Wooly What’s-It approaching and call him over. Wooly just so happened to bring a blanket and picnic basket with him. He opens the blanket and the group take their seats on it just as the Fobs arrive. They greet their friends, and when Grubby asks what they’re doing here, the Fobs seem a bit confused, saying they have come “just to stand around and watch”. Teddy invites them to sit on the blanket with them, and the Fobs eagerly agree, while one is quickly shushed for asking where the cake is.

The Grunges are next to arrive, and they are excited to start a Grungeball game in the meadows, while one Grunge is similarly hushed for asking where the cake is. The Grunges propose that their team play Teddy’s team of friends, and Wooly seems sure they can win.

We find everyone in the midst of a Grungeball game, with Grubby at bat and an opportunity to tie the game. He manages to get a hit and tie the score, bringing Wooly to the plate. After two strikes, Wooly crushes the ball, but breaks the bat in the process. While Grubby manages to run home, Wooly finds himself frozen to home plate, apologizing to the Grunges for breaking their bat. Meanwhile, the Grunges recover the ball and tag Wooly out.

In the final inning, with Teddy’s team one run ahead, the Grunges have the bases loaded and two outs. Grubby is tasked with striking out the final batter. He manages to get the first two strikes, but the Grunge clobbers the final pitch into what will apparently be a grand slam home run. Fortunately for Teddy’s team, Leota the Woodsprite flies onto the field and catches the ball for the final out. The Grunges hesitate at first to count the out since Leota had only just appeared on the field, but eventually allow it. Everyone congratulates Leota on catching the ball, and Wooly suggests she be given the game ball for a great play. But Leota awards Teddy the game ball in honor of his birthday party, at which point everyone yells “Happy Birthday, Teddy!” When Teddy asks how everyone knew it was his birthday, Wooly reveals that Grubby had told them and he and Gimmick planned the whole surprise party.

They go back to the picnic blanket, and Wooly reveals that the food for the party is hidden in the picnic basket while more food and presents are hidden in the Airship. Together, they gather around and wish Teddy a Happy Birthday (“It’s Your Birthday”).