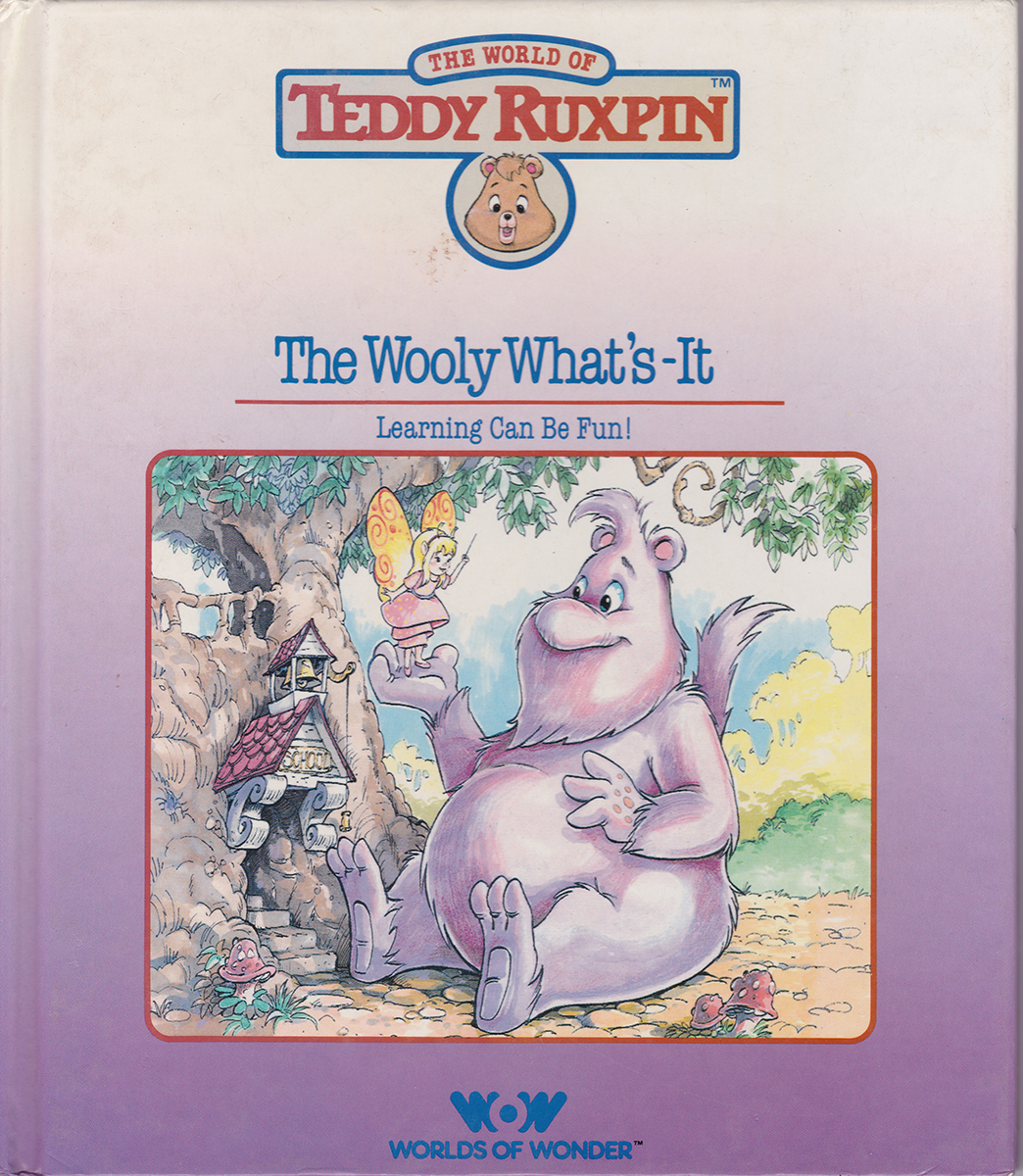 Learning Can Be Fun!

It's a little secret somebody forgot to tell you.

“The Wooly What’s-It” is the title of one of the original “Adventure Series” stories for the World of Teddy Ruxpin. After saving Leota’s School Tree from a violent windstorm, the titular Wooly What’s-It is invited to become a regular student there. Intimidated and discouraged by the large words and complex concepts taught by Leota, it’s up to Teddy, Grubby, and Gimmick to encourage Wooly to continue his studies.

This story would be the second appearance of Leota the Woodsprite after her debut in “The Airship” and establish her role as a teacher in Grundo.

“This story shows the value of using your imagination and the value being neat.”

When Teddy, Grubby, and Gimmick pay a visit to the Wooly What’s-It, a violent windstorm causes Leota the Woodsprite to look for help in saving her School Tree from being blown over. Wooly uses his enormous strength to save the tree, and in return eagerly accepts Leota’s invitation to become a regular class member. However, Wooly quickly becomes discouraged and confused by many of the words and ideas taught in school. With some encouragement from Teddy and his friends, Wooly returns to school with a new zeal for learning.

While flying over Grundo in the Airship, Teddy, Grubby, and Gimmick wave hello to Wooly as they pass over his house, and he quickly invites them to land and pay a visit. Wooly appears to be picking vegetables, and when Grubby asks if Wooly intends to prepare them for dinner, the latter invites them all to stay and eat with him. Teddy remarks that despite Wooly’s enormous size and strength, he is a very kind-hearted soul (“The Wooly What’s-It”).

We next find our friends gathered around the dinner table, where Grubby is enjoying an especially good meal. Meanwhile, they hear a strong wind blowing outside, and Gimmick suggests they go out to make sure the Airship is secure. Outside, the wind is strong enough to make restraining the Airship difficult, but Wooly’s exceptional strength proves to be a huge help.

As soon as the Airship is secure, the group hears a voice crying for help in the distance and quickly come upon Leota the Woodsprite who informs them that her School Tree is about to be destroyed by the storm. Wooly uses his strength once more to straighten the tree against the force of the wind while Grubby, Gimmick, and Teddy prop the tree into a standing position with some nearby logs.

The next day, the group returns to Leota’s School Tree to help repair the storm’s damage. Grubby finds some miniature school furniture and Leota explains that she is the teacher to a class of both Woodsprites and Elves. Gimmick becomes indignant at the idea of real Elves, and Grubby is quick to remind him that the inventor had said the same thing when they’d first met Leota.

Wooly remarks that he’d never realized there was a school so close, and Leota explains that whenever Wooly would pass by, she and her students would have a “What’s-It Alert”, in which they’d hide under their desks from the passing Wooly. However, from now on, they’ll greet him when they see him. When Leota asks how she could ever repay Wooly for saving the School Tree, Wooly asks if he might be allowed to eavesdrop on a lesson now and again, to which Leota extends an invitation for Wooly to become a full-fledged student at the school. Wooly eagerly agrees! When the school re-opens, Leota introduces Wooly to the class and begins to teach.

Just a few days later, Wooly shows up at Gimmick’s house unannounced. Wondering why he’s not at school, Wooly explains to the trio that many of the words Leota was using to teach her class--like “history” and “geometry”--scare him into feeling unintelligent, and he became so discouraged that he stopped attending class altogether. Teddy thinks he has a solution to the problem and the three do their best to explain to Wooly that many of the big words he hears in school are just fancy ways of saying simple ideas (“Let’s Call it History”).

Emboldened by his friends’ encouragement, Wooly resolves to return to the School Tree and continue his education.

Teddy, Grubby, and Gimmick pass by the School Tree and find Wooly happily attending class. Leota begins the lesson by substituting words like “history” and “geometry” with phrases like, “looking back at yesterday” and the study of “different shapes”. Wooly happily informs her that she is free to use words like “history” and “geometry,” and Leota seems impressed.

Wooly informs his friends that Leota has agreed to help him discover who his ancestors were, and explains what “ancestors” are to Grubby. Leota confides to Teddy that she appreciates the secret he shared with Wooly about not being afraid of big words, and vows to share that secret with her students from now on. Wooly asks Grubby if he knows what a “dodecahedron” is, and explains it’s simply a twelve-sided figure. He then asks Gimmick what a “Turlybopricalsnap” is, and confesses to a bewildered Gimmick that he “just made up”: a nod to Gimmick doing the same to Wooly during “Let’s Call it History”.